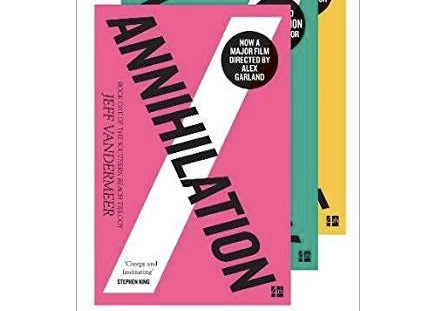 For a while I had completely lost my reading mojo.  And I mean completely.  I didn’t read one single line of any books when I was on holiday last week and that must have been a first for me since I was six and first learnt to read…

I blame this book.  What the heck was that all about?

Sci-fi… I’m ok with that, I like a bit of science fiction on the side occasionally… a little bit of horror too (I went through a mad Stephen King phase in my late teens)… but this?  It’s kind of psychedelic and I am not into that… it’s trippy and dreamy and strange… and I get it, probably totally original too… but geesh… give some narrative to follow please!

I just didn’t get it at all.

“Something happened” in what is now called area X, strange and at times horrible things happen to the expeditions that get sent in to investigate – the premises are intriguing, right? but then… a lot of words to describe ‘weird’ phenomenon and a story that doesn’t end, doesn’t make sense, characters that are not really developed or explained.  It gets progressively weirder and weirder and whilst that kinds of draws you in because you really want to make sense of it all …. it doesn’t.  Not to me.

From reading some of the review on Goodreads it is clear this is a real ‘Marmite’ book and I have to say I definitively fall in the ‘no-way Jose’ camp.  I’m open to a conversation if you’d like to explain it to me but it better be good.

I mean… I can see why some people hails it as great, I really do.  It just wasn’t for me and completely fried my brain and I didn’t want to read anything anymore for ages.

Netflix has just released a movie from this book.  Alex Garland (he wrote ‘The Beach’ about  20 years ago… gulp already?…) directed it and I have to say… although no Oscar contender, at least it makes more sense… It is also VERY different in many details… it has a beginning and a middle and an END.  And I quite enjoyed it.

Alex Garland talks here about it:

This book is also the first in a trilogy all releasead in 2014 (could have been three parts of a fat book to be honest)… I went as far as reading the second one hoping for an explanation which didn’t come… in fact the story is told from a completely different point of view and character following the previous books events, which explains certains things.. but I get the feeling that ‘conveniently’ makes things up because otherwise the whole house of cards wouldn’t stand up.

I didn’t have the strength to read the third;  if you do tell me how it ends.