Do you believe love at first sight?  I do.

Or let me put it in a different way… you know how sometimes you see something or someone and it’s familiar… like you’ve seen before, or been there before… in another life or something.  Not that I believe in reincarnation per se… but you know what I mean, right?

I used to have a rain cape in a similar material as this when I was little, it was a bit like a poncho but with sleeves.  It was pale blue (but I remember a yellow one too, so maybe my sister had the yellow? or I had the yellow and she had the blue? who knows)  and had a hat to match, one of those hats with a longer brim at the back a little bit like the classic fisherman’s hat.  I loved it even if we didn’t wear it often and I used to pair it with a transparent umbrella with a yellow border and yellow ducks on the panels, one of those children’s umbrella that come right down your shoulders like a cocoon…

A little bit of trivia on a Sunday morning for you: waterproof coats are nothing new, in fact samples from 1900BC have been found – bonkers eh? – … Inuits used to make them out of whales and seals intestines which amazingly, are breathable just like the ubiquitous Goretex.  In South America people used rubber to make their shoes and garments waterproof for centuries and in China people rubbed vegetable oils into fabric to the same effect.

The first modern waterproof raincoat was created following the patent by Scottish chemist Charles Macintosh in 1824 of new tarpaulin fabric, described by him as “India rubber cloth,” and made by sandwiching a core of rubber softened by naptha in two pieces of fabric.  (According to Wikipedia)

Yellow coats are a classic ‘fishermen’ look and their history is very interesting but basically the material used to make fishermen’s garment was soaked with linseed oil to make it waterproof… and linseed oil turns yellow with time and aging.  And that’s why they were yellow!  Who knew.

If you want to read all about the history of rain jackets go here.  It’s fascinating.

And if you don’t like yellow turn away now…

My jacket is manufactured by the iconic Swedish brand “Tretorn” with PVC free PU, has welded seams and it’s totally watertight.  I can vouch for that because I wore it yesterday to watch what felt like an underwater hockey match.  It’s not lined but I wore it over an ancient light long down jacket and I was toasty.  The wind doesn’t get through either. 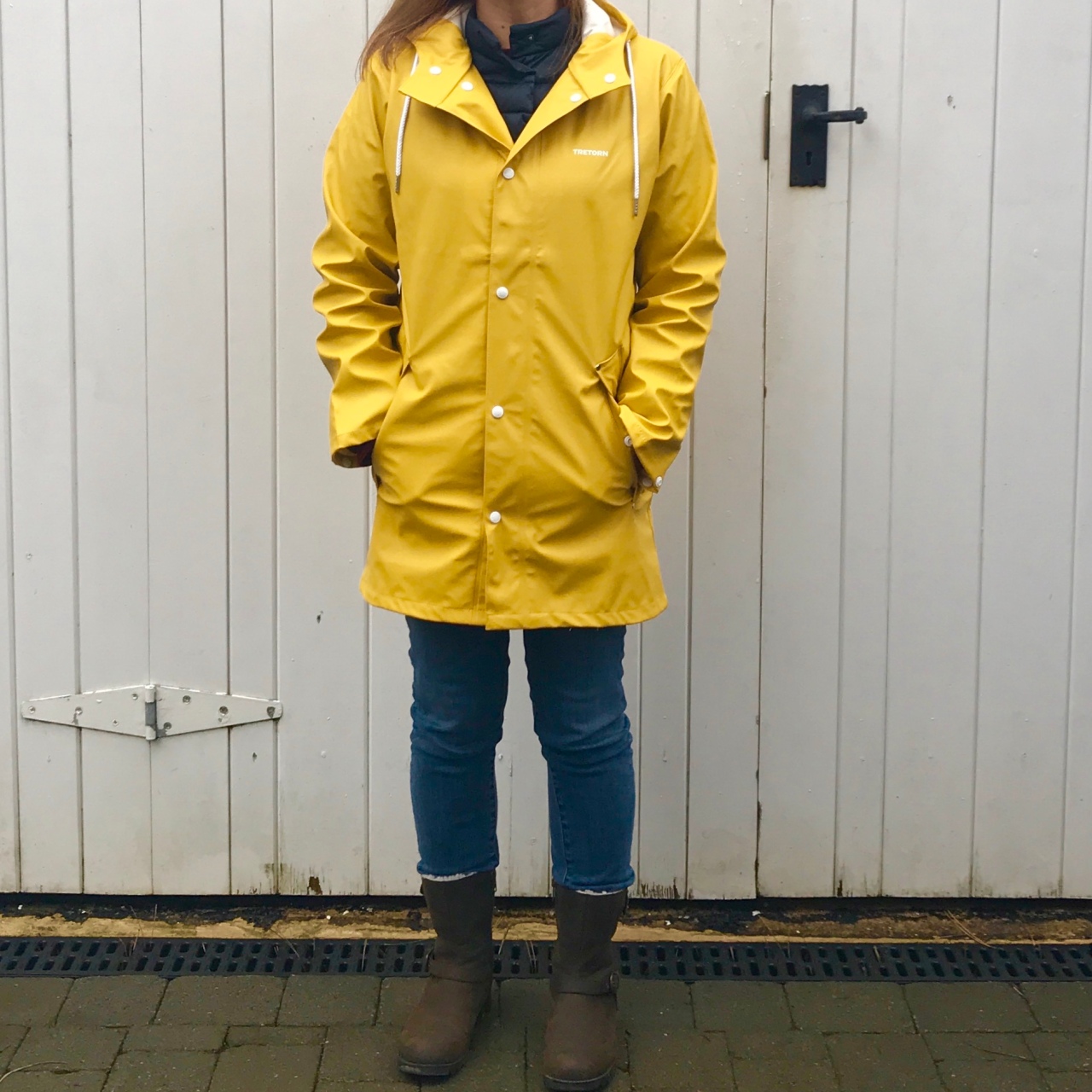 It’s really soft and comfortable and there’s something totally child-like in wearing something so bright and light in the rain and not get wet.   It’s like walking through puddles with rubber boots… don’t tell me that doesn’t bring a secret smile to your face…

It comes in a lot of different colours (but yellow is the best!) and a few different models.  This one is called ‘Wings’ and you can find it here.

A perfect item made for imperfect times, after all there is no such thing as bad weather… only wrong clothes…

(by the way this is not a sponsored post!)