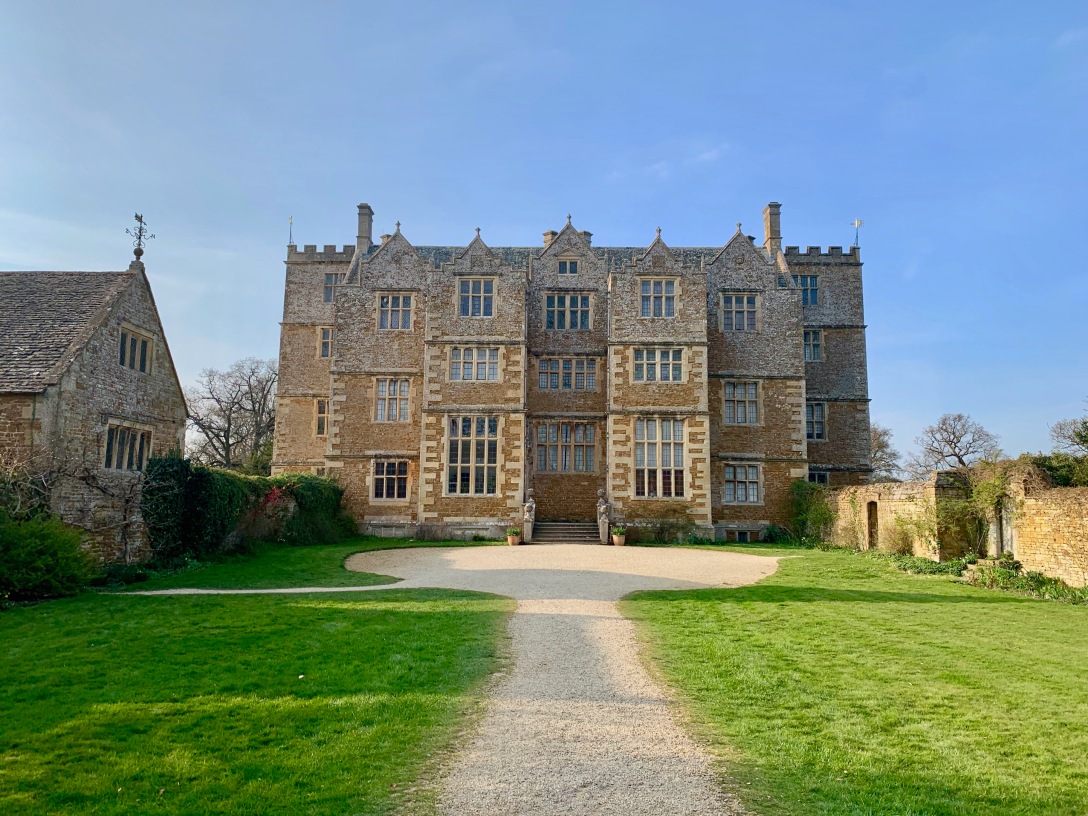 For the first time in ages, and I mean… months, yesterday we had a free Saturday; no sport commitment, no school events, no family duties. Nothing.

And the sun was shining.

I promised you it felt like we were on holiday!

‘The big boys’ were on a hockey tournament miles and miles away, Mr took No 3 to ‘look at cars’ and I grabbed my parents and our National Trust memberships and went exploring.

I haven’t taken advantage of my membership enough, and I’m determined to change that this year… there are so many amazing places to visit near us that is a real shame to leave them undiscovered.

Take Chastleton House for example… it’s fabulous. Truly fabulous… and until yesterday I didn’t even know it existed. Sigh. Shame on me.

The early history of the house is interesting: Walter Jones was the first owner of Chastleton House. The land and the previous house that stood here had been owned by Robert Catesby, leader of the Gunpowder Plot. Walter’s family, originally from Wales, had been in the wool trade, but Walter trained as a lawyer, served as a Town Clerk in Worcester and as a Member of Parliament. He was married to Elinor Pope, the daughter of a Flemish immigrant, who had served as a maid to Elizabeth I. Being a landowner was a first step on the social climbing ladder. In 1609, his son Henry married Anne Fettiplace, the daughter of a member of the local gentry. This marriage was another step in the advancement of the Jones family by developing connections to more established families. His son Arthur was a Royalist and had fought at the Battle of Worcester in 1651. The loss of this battle marked the end of the Civil War, leaving families like the Jones’ on the losing side and subject to heavy fines. This period marked the downturn in the family’s finances as they had supported the ‘wrong’ side in the Civil War and were subject to many fines because of it. The latter part of the 17th and early part of the 18th century saw a series of Chastleton owners who died young, made some structural improvements to the building and in one case ended up in jail.

Even though the house had been open to the public since 1936 to help with its upkeep this wasn’t enough and in 1991 was acquired by The National Trust, with the aim to keep the unique feel of Chastleton and preserve the romantic air of decline that enveloped the site, and they really succeeded. Walking through it is like stepping back in time.

The Great Hall has the original 18ft long table

The garden and grounds are gorgeous… and so is the location, deep in the Oxfordshire countryside

If you’re looking for a lovely afternoon out, do go, it’s one of the most charming place I’ve seen for a long time.