I am so so happy with this sweater!

Let me explain.  Mr M drops the boys at the bus stop as normal and after 45 seconds I get 3 – three!! – text messages.

Did they plan this? Is this a concerted effort for my mental demise?

Seriously.  Not funny at all.  So then I have to run around the house like a headless chicken collecting various items to take to school!!  You should have seen the face of the receptionist, she didn’t know whether to laugh or pity me.  Both probably.

THEN I had to spend more than an hour on the phone with eBay and Paypal trying to sort a huge mess with my accounts… what a palaver… they were both absolutely brilliant and helpful – and patient – but it did take ages.

THEN I had to sort out lifts for the boys tonight because Mr M and I dared having a dinner engagement and now I virtually own favours to half of the town which I know they’ll be called upon at the most difficult times because let’s face when you’re a parent you’re not allowed to have time for yourself and if you do… there will be hell to pay.

So don’t chastise me if instead of beginning to iron the 23 shirts in my basket I decided to take 20 minutes to finish the last edge to the most glorious and useful little sweater I’ve knitted in a while.

NUUK from issue 1 of Laine magazine.  My third pattern from that lovely publications… I haven’t even started on the other two issues… but they’re glorious too. 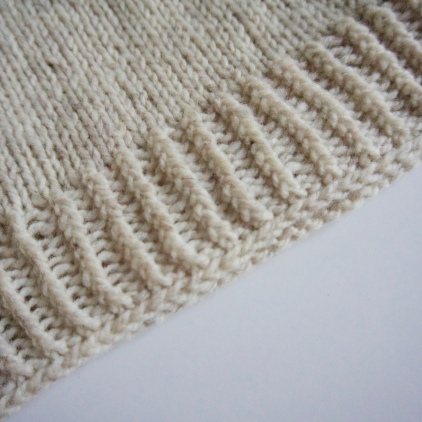 A great pattern, well written, I used Brooklyn Tweed Shelter in Fossil, which has to be one of my favourite yarn ever… and the results is …

… delicious… (can you say that about a sweater?)

Now, leave me alone, I do have to iron three school shirts for tomorrow at least!