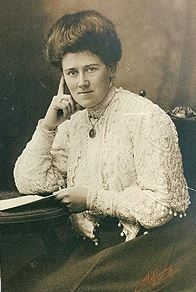 Grace Billings was the first woman GP to set up a practice here in Cheltenham in 1899.  One hundred and 118 years ago.  And we’re still fighting for equality… geesh…

“When she first came to the town there were already forty doctors there; she was the forty-first, and the first woman. She has related how she called on them all, as was the excellent custom of those days, and how she was received quite kindly, but, in some cases, obviously not seriously.” (Obituary in BMJ 13 July, 1957, p. 108)

‘The Saturday review’ wrote at at the time that “lady aspirants to medicine and surgery desire to rid themselves speedily and effectually of that modesty which nature planted in them”.

It didn’t stop her getting married and having children and an active career spanning many many years.

“For some time she was the only woman present at B.M.A. meetings. It needed some courage to go to the dinners after the meetings, when women were in the extreme minority, but this never seemed to worry Dr. Grace. It was amusing to watch her light her after-dinner cigar in complete unconcern at the surprised glances of newly arrived doctors to the area.” (Obituary in BMJ 13 July, 1957, p. 108)